Par Gérard Vespierre  |  16/02/2016, 10:33  |  1330  mots
Who could have predicted, 3 years ago, that Russia will be facing those days, a severe economic crisis? Internal or external causes? Which Policy the Kremlin will put in place to combat this situation? Gérard Vespierre Founding Partner of 'Strategic Conseils' and Research Associate at FEMO (Fondation d'Etudes pour le Moyen Orient - Foundation for Studies on the Middle East).

Who could have announced that after growth rates of respectively 4.3 and 3.4 % in 2011 and 2012, Moscow would experience a negative rate of -4% in 2015 ? No one.
What are the root causes? Structural deficiencies in the Russian economy? US and European sanctions after the Ukrainian conflict? The dramatic decline in oil prices?
Let's first take a look at the growth performance on recent years. The graph below clearly highlights the difficulties are not relevant to a spot situation, or related to short-term items. The downward slope of the Russian economy has clearly started from the beginning of the decade, 2009 with the global crisis being naturally put between parenthesis. 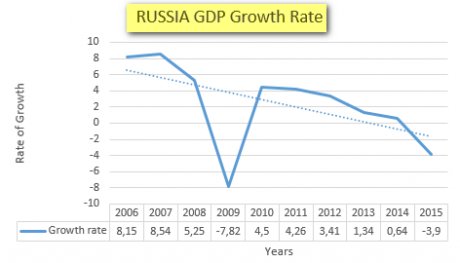 The slowdown which began in 2013 occurred when the oil price was still above 100 dollars per barrel and the Ukrainian crisis which started at the very end of the year could not impact the full year.

The first movements against the Ruble

What happened in 2013? The first signs of decline of the Russian currency, very stable against the euro for several years, around 40 Rubles to 1 Euro, occurred in May (colored area in the graph below) why?
The first statements of the Russian president, threatening sanctions against Ukraine if an economic agreement was reached and signed by Kiev with the European Union... We know Financial Markets, investors, are deeply concerned with strong political statements, any type of threats, because these create a new levels of risk, and stakeholders have an aversion to risk, or at least to balance it they ask for the payment of a negative premium... what they did immediately on the Ruble...

Source Latribune.fr
The Ruble monetary stall actually happened when the threshold of 50 Rbles for 1 Euro was reached in late 2014.

The considerable impact of the oil price drop

This second parameter, not only caused a severe drop in the Russian State revenues, but led the Ruble to a ...43% value decrease to the Euro and 50% to the Dollar, since October 2014... ie, within 16 months only... 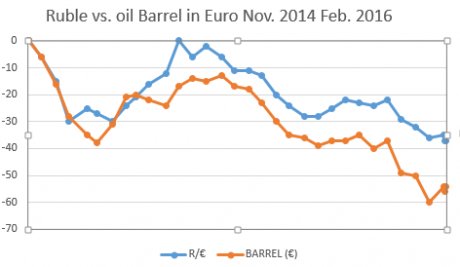 This monetary devaluation naturally induced a rise in inflation to 15% for the past year, and a symmetrical rise of the Russian Central Bank rate to 11% today, which naturally adds an another slowdown factor to the economic activity.

How to get out of this crisis?

Like in any implementation of anti-crisis policy, it is first necessary to make a correct diagnosis on its true causes.
The Russian economy does experience a real downturn since 2013, as its growth rate reached only 1,3% this very year, before the outbreak of the Ukrainian crisis, and at a time when the oil price was still standing above 100 $ per barrel....!
Apart the negative internal structural factors of the Russian economy, rigidity, lack of diversification and innovation, difficulties of creating new industrial businesses, the oil price fall is the external main factor explaining this crisis.
This is why the option of a truly domestic recovery plan mobilizing internal financial reserves was not considered as an option by Moscow.

Information issued by Reuters January 25, cannot be considered as such:
"The Russian government has set aside 135 billion rubles (1.58 billion euros) to support the real economy in the context of an anti-crisis draft plan, said two officials. A third source added, Moscow could also tap into a 340 billion rubles reserve to try to defuse any social unrest ".
The awesome amount of $ 350 billion Rubles, translated into European currency represents not more than 4 billion Euros for a country of.... 145 million people ....just under thirty Euros per capita on a full year ... ... in other words, a communication operation, but not a bailout.
Furthermore, the projected privatization of some companies is not intended to contribute to the resolution of this crisis, at most to create some additional revenue to the National budget, which really needs it.
Watermarked, this translates the vision from the Russian government: the main cause of our financial crisis is not internal but external: the oil price.
it must accordingly devise an external plan to try to resolve this.

From the time the diagnosis is clearly stated, the causes being considered mainly external, no internal recovery plan will significantly change the Russian economic situation, it remains only one way, to attack the external evil root: undertake everything to raise the oil price.
This is clearly this strategy that the Kremlin has decided to implement. Two questions then arise: who is the privileged interlocutor, and secondly how?
The table below depicts the oil import/export situations from the main actors. Date are sourced from EIA (Energy Information Administration- US Department of Energy) and include in "oil production" the "light distillates" obtained from gas production. 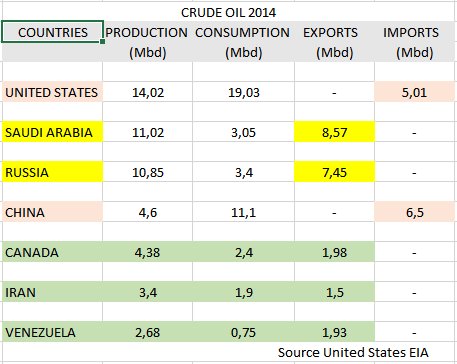 It clearly shows that the two main world oil EXPORTERS are actually RUSSIA AND SAUDI ARABIA.
It is also the occasion to again stress the fact that whatever the future of the shale oil opportunity in the U.S., and even considering the new LEGAL OPENING on oil export, this country IS AND WILL REMAIN A CRUDE OIL NET IMPORTER.
This table depicts as well that the necessary tradeoffs to rise oil prices will have to take place between the LEADING EXPORTERS, namely, Russia and Saudi Arabia.

Above all, not to appear demanding...

In this great worldwide game, opportunities for exchanges between Russians and Saudis are not lacking, as mentioned in a previous article in Latribune.fr "Russia, challenged by the price of oil"
One can naturally mention the discussions about the Syrian situation providing opportunities to broaden the debate, as nicely said by diplomats, "an exchange of views on the world situation ...."
But there is also an other type of strategy which consists to involve a third party ... preferably a friendly country ... also undermined by this oil price situation ... Venezuela.
Attentive observers could not miss the point that the Venezuelan the Ministry of energy and minerals Eulogio del Pino has just undertaken an international tour in several OPEC countries, Venezuela being a founding member...
Those same attentive observers could not neither have missed the fact that the Venezuelan Minister started his trip with a stopover in Moscow before paying a visit to Qatar, Iran, and finally Saudi Arabia..... creating an additional trading gateway between the OPEC AND A NON OPEC COUNTRY, Russia.....
Time was becoming critical, the oil price reaching 27 $ a barrel on the 20th of January....!

The importance of the announcement effect

Finally, any important mission must be carefully prepared with a communication campaign.
Venezuelan President, Nicolas Maduro, was very quick to inform the media and the world "that an agreement to stabilize oil prices....was close".
Failing the agreement, he created at least one announcement effect....
90% of the movements in the oil market being purely financial and therefore without physical movement, stakeholders were prompt to react, took the announcement for granted, and with the current financial market volatility, created a price rebound of over 25 ... % ...In a week.
It should be added that those 25% actually represent a rise of only $ 7 per barrel, the low current absolute value arithmetically creating a surge in percentages...!
Following the talks in Moscow, the Russian Minister of Energy went on to indicate that the oil cartel would convene a meeting in February, including participation of non-members, and that Moscow was ready to participate. He said that in the past Saudi Arabia had raised the possibility of a general production reduction of 5% .
Announcement, announcement....
The 'Big Game' has yet started. At any maneuver, against-maneuver, and Saudi Arabia finally indicated that no agreement is in sight.
The president of "Saudi Aramco" deemed irrational the drop of oil prices below 30 dollars.

"The market has gone too far down, and it is inevitable it recovers. If prices remain low, we will resist for a long time. Obviously, we do not expect such a scenario". He stresses the point that Saudi Arabia would not reduce its oil exports nor would any competitive producers..... ! to be seen... For Moscow, it is urgent to find a solution to this very difficult situation, the 'Big Game' will go on.... 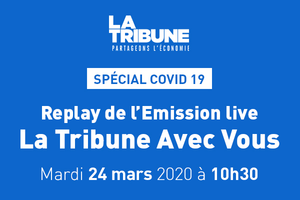